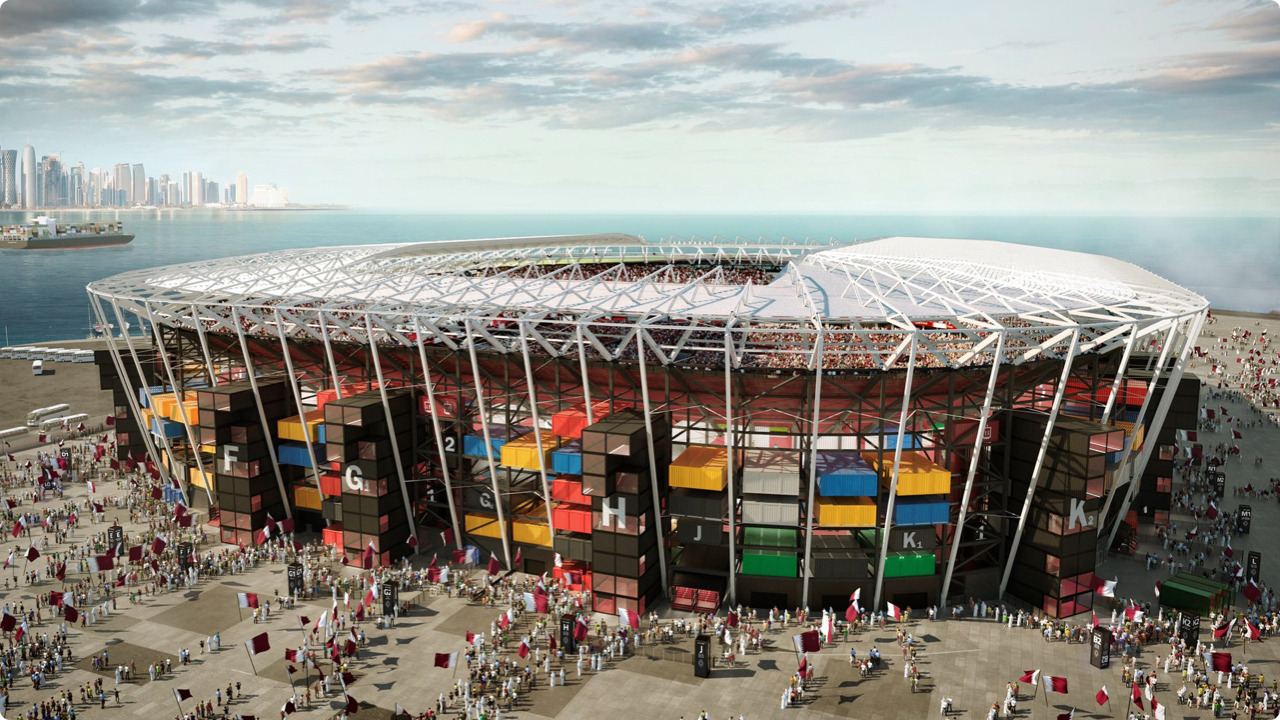 Ras Abu Aboud Stadium is in Qatar, on the shores of the Persian Gulf. The playground is distinguished not only by a delightful view of the coast. The uniqueness of the arena is that its walls are made of cargo containers. The sports facility is an example of modern architecture aimed at functionality and environmental friendliness. The components of the arena can be used in the future for different needs. After the 2022 World Cup at the Ras Abu Aboud Stadium in Qatar, they will dismantle the stadium so that residents and guests of Doha can enjoy a wonderful coastal view.

The FIFA World Cup starts in November 2022. Seven tournament matches will be at the Ras Abu Aboud Stadium, Doha, Qatar. Its second name is “Stadium 974." It was built according to the project of the Spanish architects Fenwick Iribarren. The structure was created in such a way that it could be completely disassembled. The number “974” in the name means the number of containers involved in the construction and the international country code. Some containers forming part of the walls have stairs, stands, and bathrooms. The capacity of the Ras Abu Aboud Stadium is 40 thousand people. For a temporary sports ground, this is a lot. Spectators will be able to comfortably sit in the stands, protected from the scorching sun of Qatar by a large hinged roof. The shape of the walls and the spaces between the spectator seats contribute to natural ventilation. The proximity of the arena to the sea also contributes to the cooling of the stadium.

You can get to the place by water taxi or ferry. You don't need to tell the address of the Ras Abu Aboud stadium to taxi drivers – all residents know perfectly well where this, albeit temporary, attraction of Doha is located.

Ras Abu Aboud Stadium is in Doha, the capital of Qatar. The largest city in the country is on the shores of the Persian Gulf. It is home to about 600 thousand people. The land on which the city is located has undergone land reclamation, and barren deserts stretch around the settlement. The climate here is very hot. Because of this, the FIFA World Cup, traditionally held in summer, has been postponed to the autumn-winter period.

How to buy tickets to the Ras Abu Aboud Stadium?

To get to the famous stadium and see the matches of the World Football Championship in 2022, you will need to place a simple order on our website. Select the game you want to attend and seat on the podium. Enter your contact details. Pay for the purchase. After payment, you'll receive the tickets at the email address specified in the application.

It is better to book tickets to FIFA 2022 at the Ras Abu Aboud stadium in advance while there are seats available. Many people want to attend the World Cup matches. Witness a grand football event! Share your impressions with friends and family! Go to the Ras Abu Aboud Stadium in Doha in friendly company, a storm of emotions awaits you!